Super-Charge Your 5G Network by Moving DNS to the Edge

The number of 5G subscribers is expected to exceed 580 million by end of 2021, with 3.5 billion subscribers predicted in 2026, according to Ericsson's recent mobility report. This means that it is set to become the fastest adopted mobile platform ever, gaining around one million new subscribers each day.

To support this, to date, globally, more than 160 communications service providers have launched 5G services, with more than 300 5G smartphone models available or announced. As a result, the number of subscribers with a 5G-enabled device grew by 70 million in the first quarter of this year alone, according to the same report, and, by the end of 2026, 5G coverage is expected to reach around 60 percent of the global population.

That’s a staggering figure for such a new technology and means that those with access will be able to take full advantage of the benefits 5G can offer – whether that be with IoT devices, telemedicine, autonomous vehicles and VR/AR for consumers, or things like more effective remote working, AI, and true automation for business.

The benefits are clear to see, and 5G is likely to impact every aspect of our lives; however, deploying 5G presents massive challenges for network operators. This is because it isn’t as simple as updating the Radio Access Network (RAN) over previous iterations of cellular technology, such as LTE; it requires operators to develop a completely new vision and architecture for their mobile networks, and at the heart of this is DNS.

As we discuss in our whitepaper, this is because legacy DNS architectures are simply not capable of meeting the requirements of a 5G network – particularly those related to latency, security, edge computing, and IoT. 5G requirements, such as orchestration and network slicing, also create new demands on DNS software and architecture. While people understand the role of DNS, its importance in delivering an effective 5G service cannot be overstated, particularly when it comes to latency.

When we talk about 5G, the first thing that comes to people’s minds is speed. Therefore, if a DNS lookup is slow to return, then the network will feel slow to end-users, and the benefits of 5G will be lost to them. In addition to this being frustrating for end-users, more and more life- and business-critical services based around Machine-to-Machine (M2M) communications are also coming online and require time critical connectivity, where low-latency DNS will also play an important role.

This is where ‘Edge Computing’ – i.e., data processing at the ‘edge’ of a network, bringing it closer to the location where it is needed – will play a huge role in 5G networks and addressing overall latency, including DNS.

Data intensive services like video streaming, along with the increasing number of applications, especially in verticals such as retail, manufacturing, transportation and warehousing and health, are moving larger parts of their functionality to cloud computing. This has many benefits; however, many applications require the cloud computing resources to be accessed with extremely low latency.

This means Edge Computing for applications as close as possible to the radio network, even located at the base of the cell tower. Not only does this reduce latency, but it also reduces the amount of traffic backhauled across the core network for the mobile operator.

For this to be possible will require a shift from current DNS architectures, which tend to utilize a small number of large regional data centers, to a more distributed model consisting of a much higher number of smaller DNS servers. This poses the challenge of how thousands or even tens of thousands of software instances can be deployed and managed effectively. 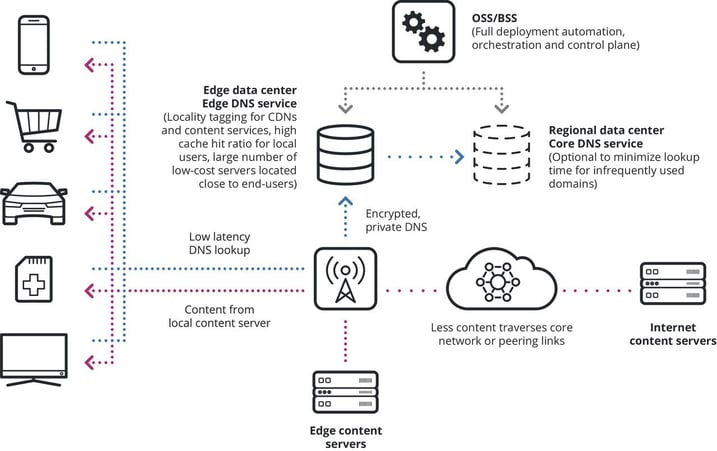 As a result, network operators should be looking at cloud-native solutions to underpin their 5G network infrastructure. Cloud-native DNS provides the ability to orchestrate and manage the lifecycle of containerized infrastructure and enables services such as DNS to be deployed at ultra-scale and distributed right to the network edge, while simplifying deployment and lifecycle management for the operations teams.

The benefits of 5G for the end-user are clear, but to take full advantage of them requires better performance and lower latency. As a result, network operators need to rethink how they approach their architecture, especially when it comes to DNS. To find out more about considerations around how DNS can support your 5G goals, download our "DNS in a 5G Network: New Requirements and Demands" whitepaper.